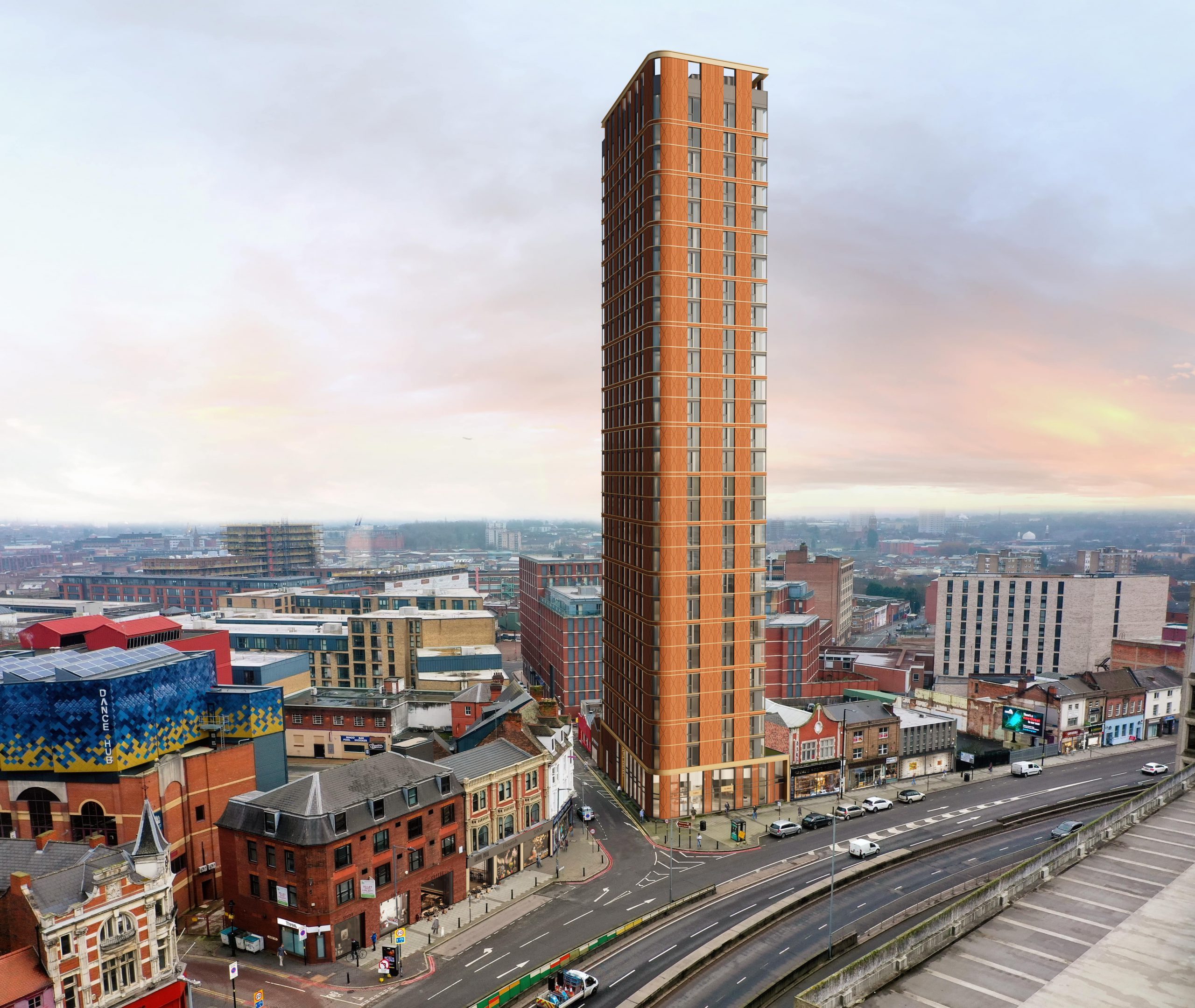 They specialise in connecting investors and property developers at the earliest stages of developments, helping to identify & build investment opportunities, and funding renovations and new-builds throughout the UK’s major towns and cities.

Their latest project, South Central is a landmark 28-storey development, situated on the corner of Bristol Street and Essex Street in Birmingham’s city centre. 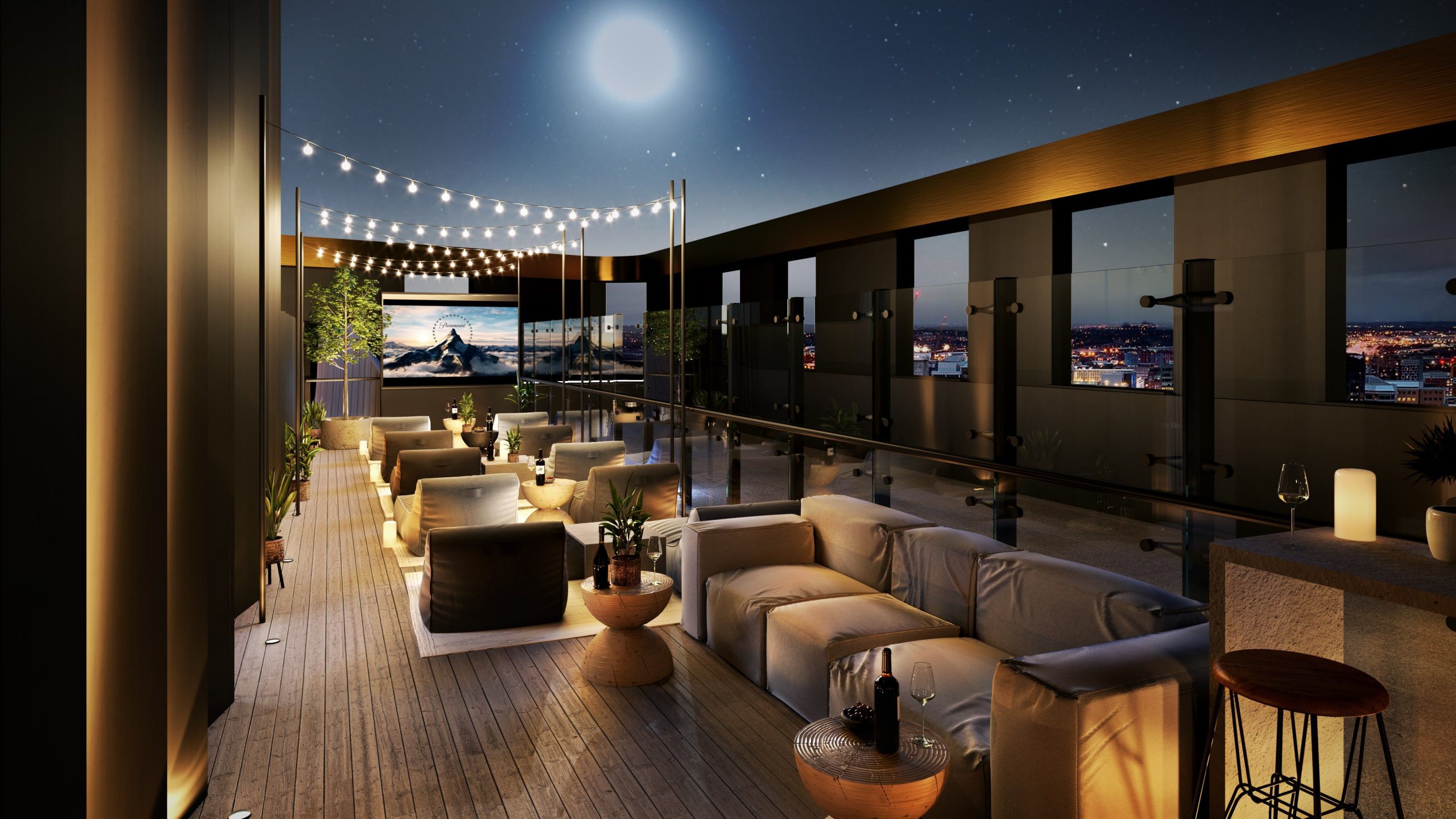 South Central, is a Tier 1 residential property in the City of Birmingham’s master planned framework. It is developed and built by a proven team with experience in delivering best in class developments of this nature.

At 28 storey’s, this is one of a handful of sites that has been awarded the permission to be built at this height in Birmingham. It follows on the back of The Bank Towers scheme, which has two residential towers 21 and 33 storey’s tall. The most recent 33 storey scheme was delivered by the same development team as South Central. 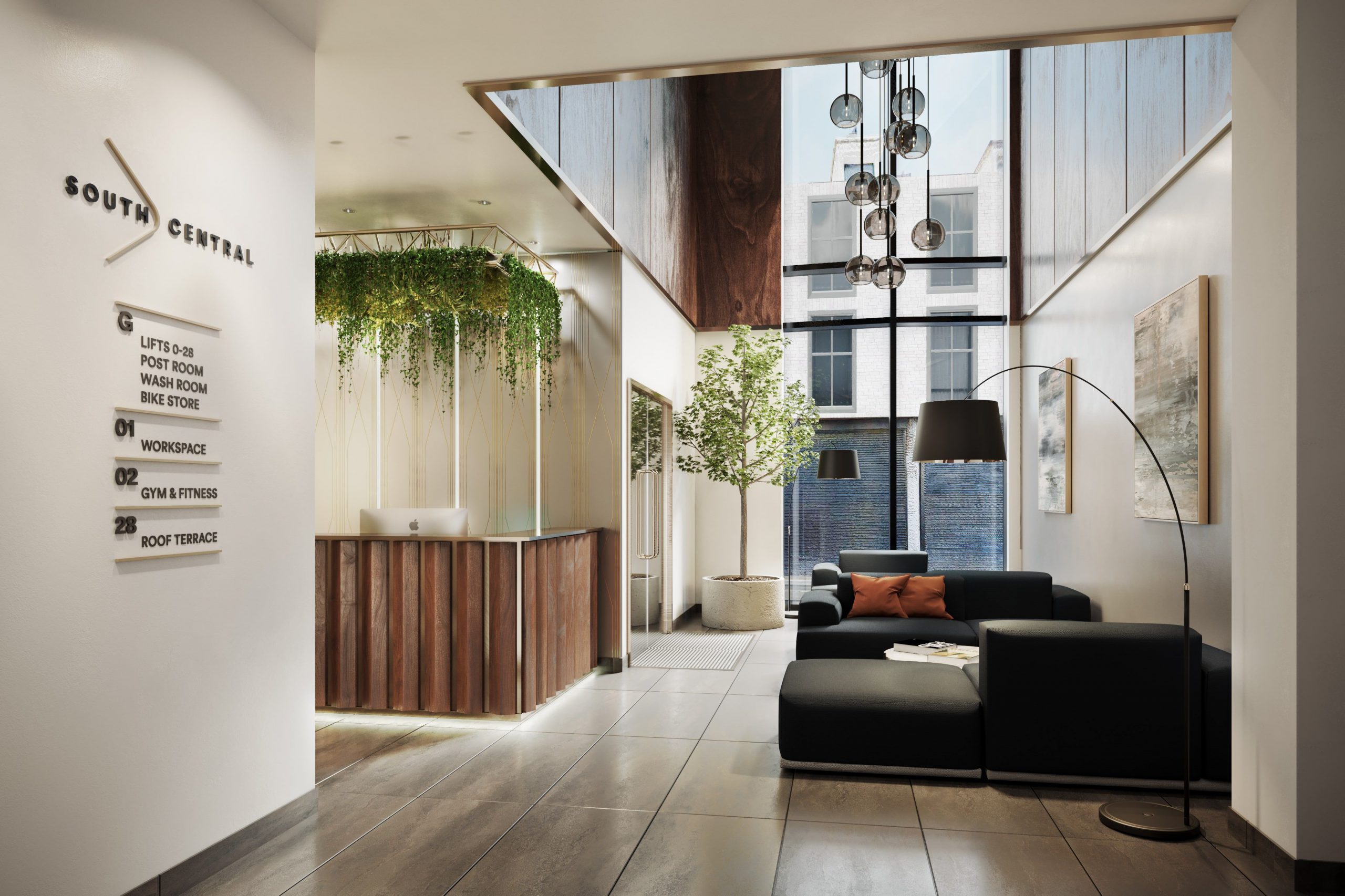 The name South Central is taken from the location of the development, it sits at the centre of Birmingham’s Southside district. Southside is the cultural heart of Birmingham and includes many of the cities most prominent areas and landmarks, such as The Hippodrome, The Bullring, Chinatown, the Gay Village and Theatreland. 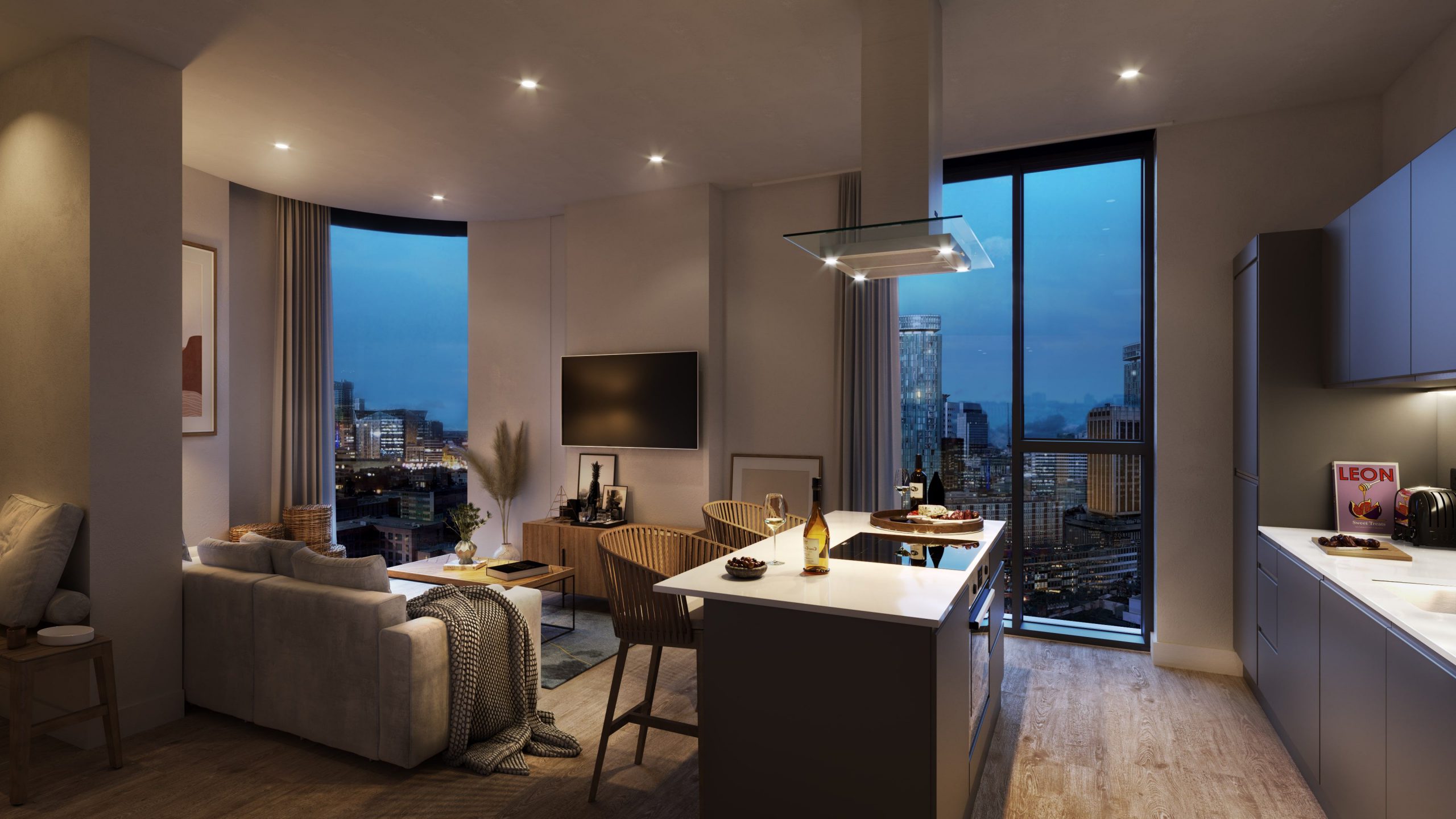 North Made Studio were tasked with bringing ‘South Central’ to life via a range of CG deliverables. The project was still evolving initially and the list of deliverables was increased to accommodate additional visuals when needed. Eventually extending to include 14 different CG images, an animation, a digital brochure, and a 360 degree VR tour of an apartment.

Working with North Made Studio was a good decision.  Investors, home buyers, funders, media, press and importantly our own team have all gained a lot from the way North Made presented the development.  Moreover, Helen, Ash & Waqar made the process simple (dare I say, enjoyable!), cutting away some of the usual noise, and keeping the project on track. 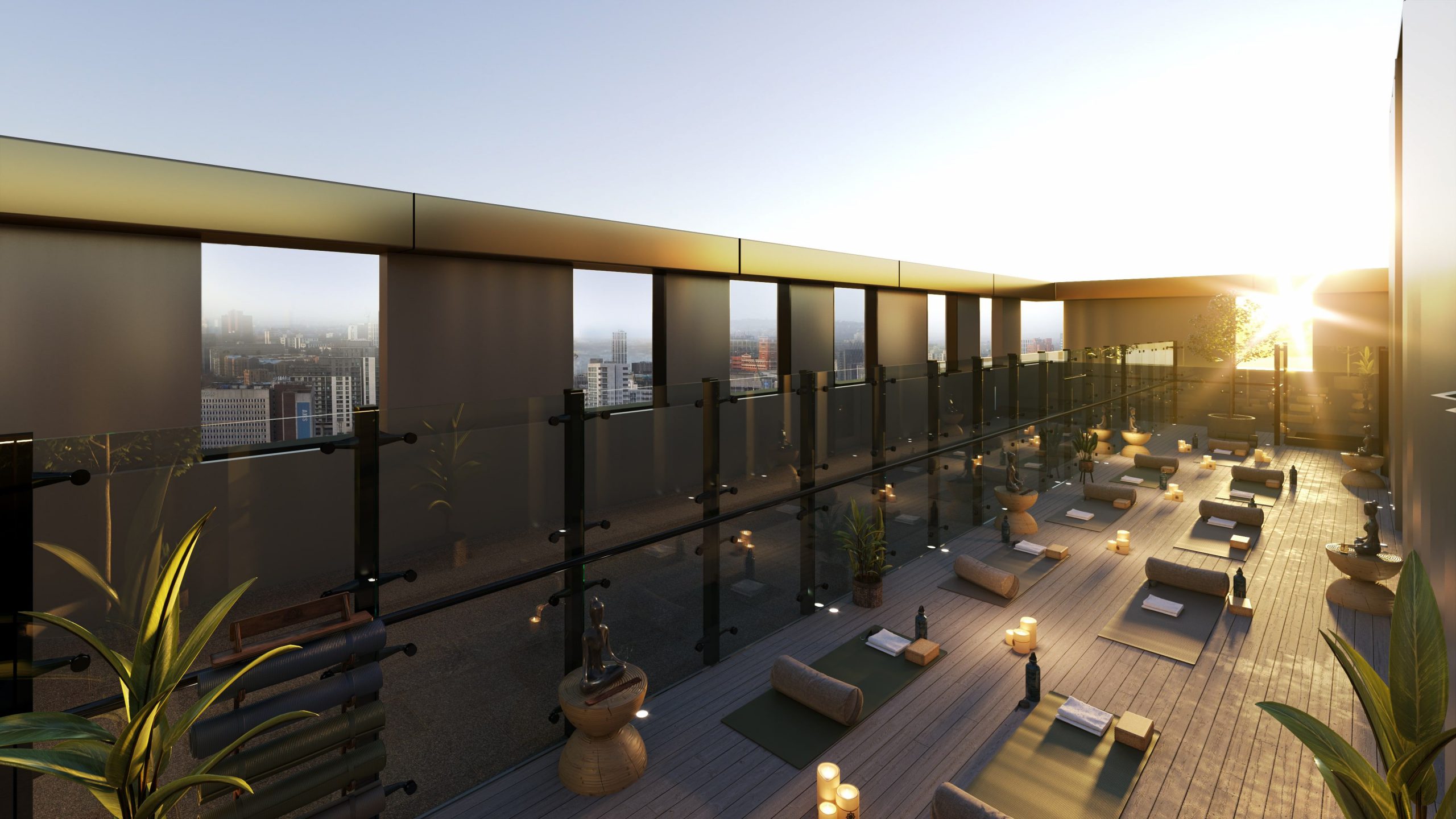 External architectural visualisations were created from three different viewpoints. The first was an elevated shot, captured via drone. This CGI allowed the complete building to be showcased in situ using a photomontage image to blend the 3D model of the building with photography of the location. It is an amazing shot that fully captures the scale of the building and the major impact it will have on the location. Its 27 storey stature can truly be appreciated. 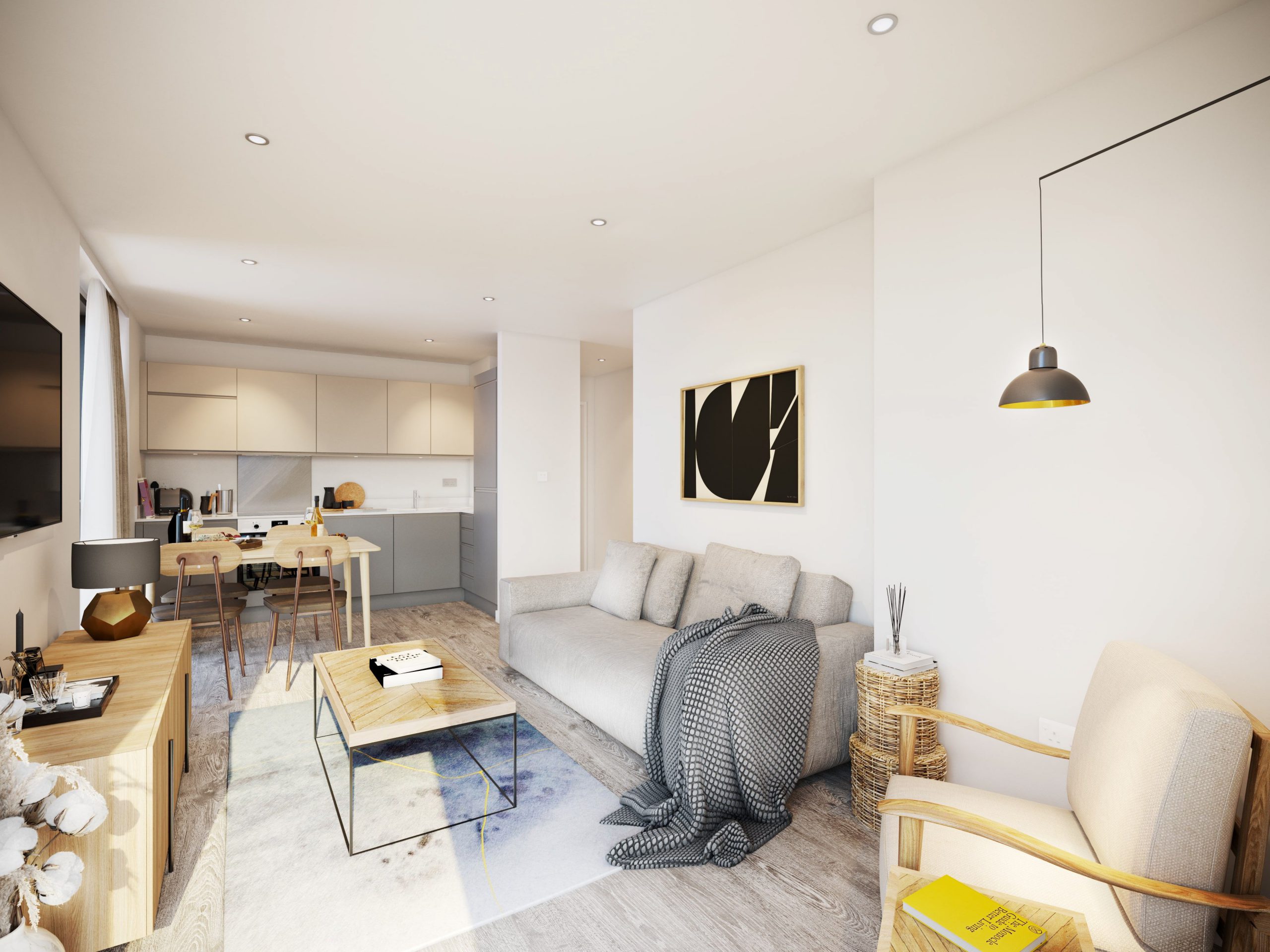 Two more architectural visualisations were created from lower levels, effectively giving an eye-level viewpoint of the property from two aspects. One portraying the approach to the entrance of the building via Essex Street, the other visual representing the view of the building when approaching from Horse Fair/ Bristol Street direction. 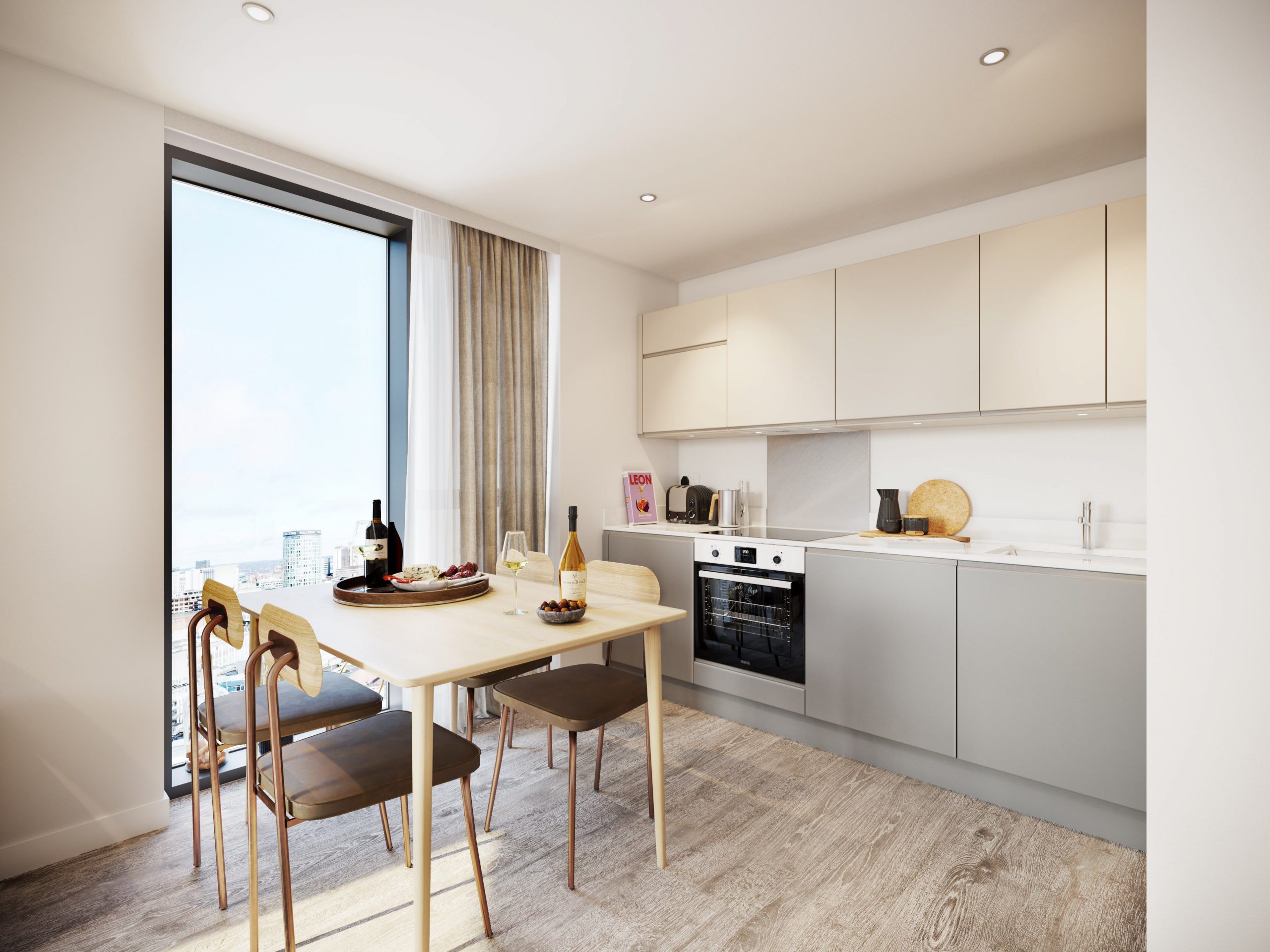 Internally significantly more visualisations were produced. As with many large-scale city-centre developments, the internal amenities of the building were a very important selling point. Starting at the base of the building is a Grande entrance, featuring concierge and post boxes. The top of the building features the stand out feature of the South Central development, a roof terrace. The roof terrace features  a sky-garden area for relaxation and yoga classes, with a separate section dedicated to a roof-top cinema experience area. All areas benefit from the amazing backdrop of views that the 27th floor has to offer. 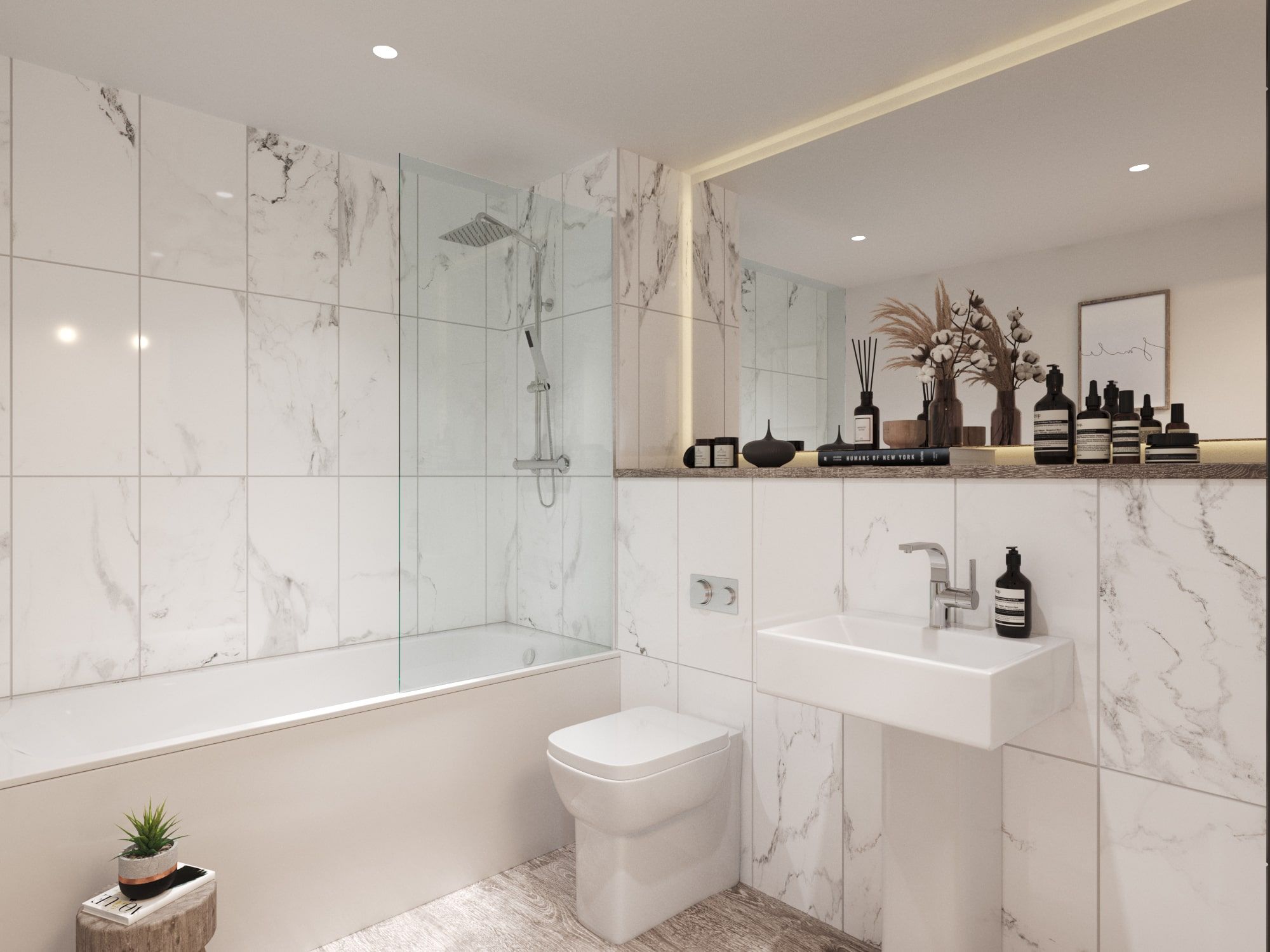 Extensive work was put into the apartment visualisations, ultimately the apartment units are what buyers will be purchasing, therefore showcasing the space and layouts of them accompanied with the quality of the final fit & finish, was vital. 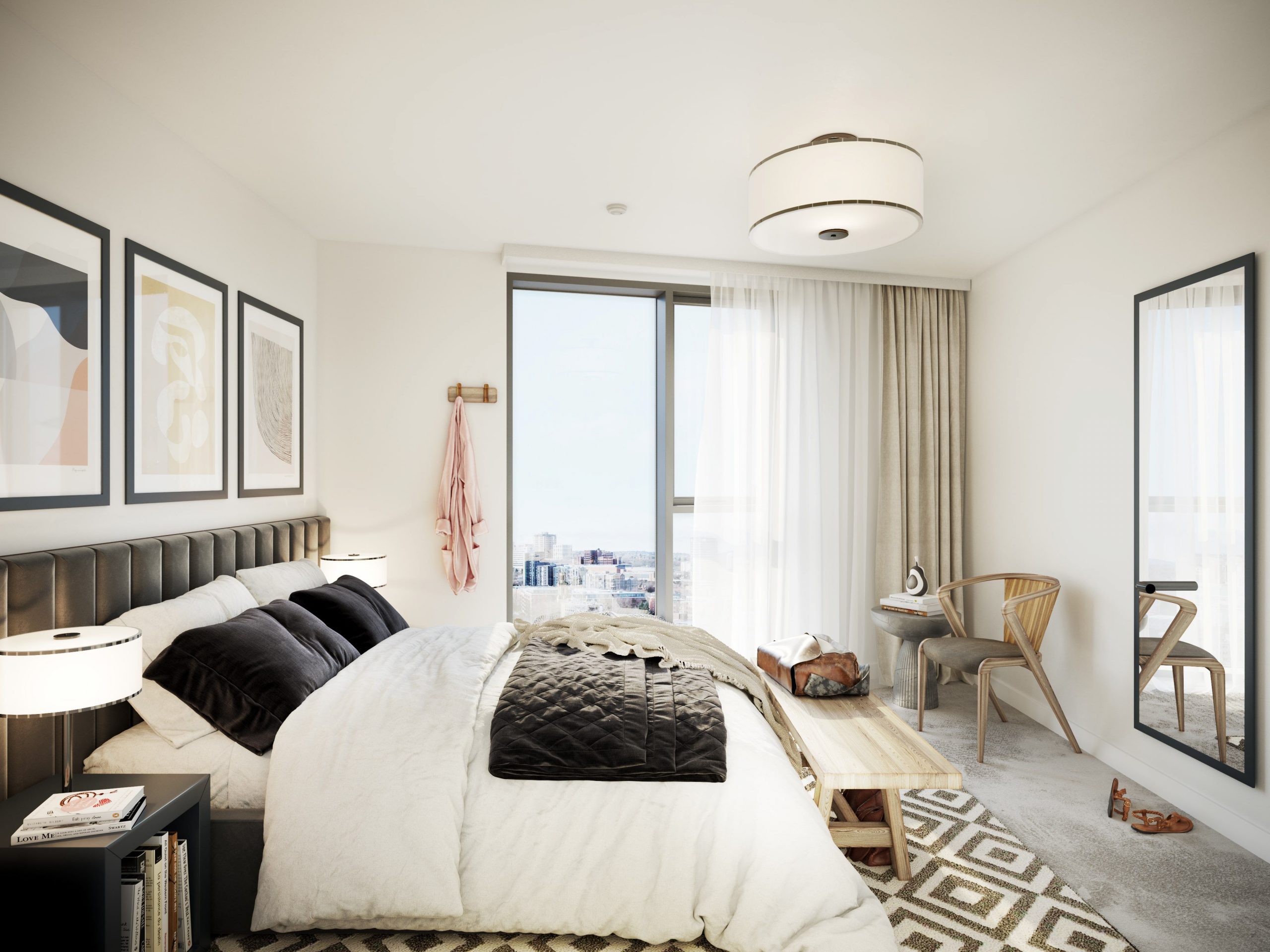 A Scandinavian inspired interior design style was selected by the client, with light colours and pale woods used through the apartment rooms. The most eventful and impactful rooms of selected apartments were chosen for the visualisations. Master bedrooms and lounge areas helped to tell the story of the lifestyle that South Central can bestow upon buyers. Whilst the kitchen and bathroom visualisations communicated the high-quality fit and finish that the apartments would be finished to. 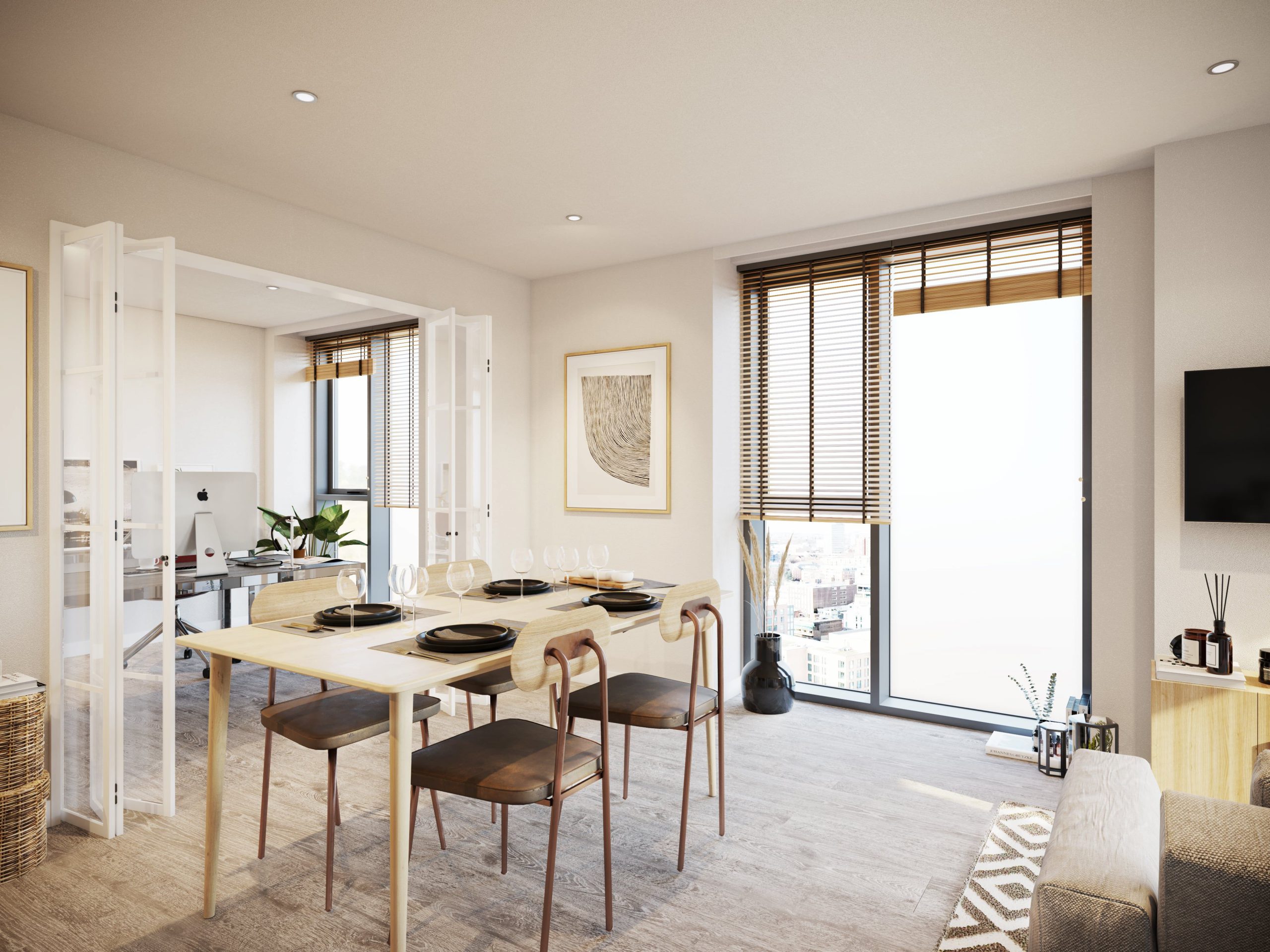